How to Tap into the Multiverse…Quantum Computing Explained 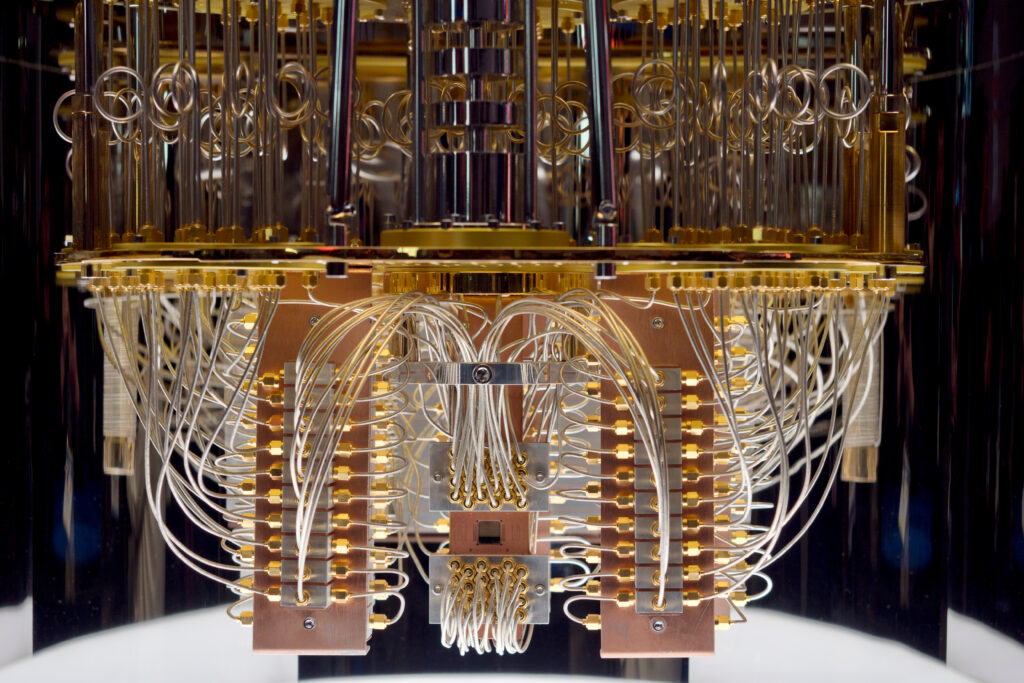 Quantum computing is one of the most profound technologies being developed in the world today. Quantum systems have the capability to solve some of humanity’s most dire problems and greatest curiosities. Today we will discuss how quantum computing came to be, where it is currently, and where it’s going. We will also talk about the capabilities of the quantum computers owned by major companies such as D Wave, IBM, and more. The topic of quantum computing is extremely difficult to explain and comprehend so we decided to start at the beginning.

On December 14th, 1900 the German physicist Max Planck first released his work on the early concepts of quantum physics. That date is widely considered to be the birthday of quantum physics and Planck the father of the field. His work was rather controversial, as it stated that there was much more to be explained about the nature of reality outside of Newton’s widely recognized discoveries. It raised a plethora of questions in the field of physics when many were under the impression that Newton’s classical mechanics theories were sufficient.  Most people never even thought to question Newton’s theories. Quantum mechanics, however, questioned everything we thought we knew in the field of physics and to make it even more frustrating nobody really understood how quantum mechanics worked. To quote the famous theoretical physicist. Richard Feynman, “If you think you understand quantum mechanics, you don’t understand quantum mechanics.”

In order to attempt to comprehend quantum mechanics, let’s take a brief trip through the historical debate of whether or not light should be considered a wave or a particle. Isaac Newton believed in something called the Corpuscular Theory which proposed that light is made up of small discrete corpuscles or, in other words, particles. Although Newton’s theory was the most accepted one at the time it had several limitations. It did not explain the phenomenon of light diffraction or interference so it was eventually challenged by Christiaan Huygens’ Wave Theory of Light. The Wave Theory of Light states that light travels in the form of waves, not particles. This theory made more sense than Newton’s since it was able to explain diffraction and interference, but, unlike Newton’s theory, Huygens did not provide a mathematical explanation for his work.  Because of Newton’s popularity and Huygen’s lack of a mathematical explanation, Newton’s particle theory remained the most widely accepted in the scientific community. Eventually, a scientist named Thomas Young was able to demonstrate interference using the wave model of light with his Double Slit Experiment.  Interestingly enough, it was eventually found that Newton, Huygens, and Young were all correct thanks to scientists such as Max Planck, Albert Einstein, and Erwin Schrodinger. Through their combined efforts they found that light behaves as both a wave and a particle simultaneously.  This is where things begin to get weird. According to this new quantum theory, we should expect light to behave as a wave when we are not looking at it and as soon as we look at it it will randomly and unpredictably collapse into a particle.  If you find this to be perplexing and impossible to understand, don’t worry, you are not alone. Even Einstein and Schrodinger themselves were baffled by this. Schrodinger was so bothered by these findings that he was quoted as saying “I don’t like it, and I’m sorry I ever had anything to do with it.” in reference to quantum physics.You’ve probably heard of Erwin Shrodinger and his famous thought experiment coined “Schrodinger’s Cat”.  Perhaps this theoretical experiment will help you to better grasp quantum theory, but if I had to guess, it will probably confuse you more.  For this thought experiment I invite you to begin by imagining a box. Inside this box are two variables: a vial of poison gas that has a 50/50 chance to release, and a cat. You do not know whether the poison will be released or not until you open the box. In traditional physics one would assume that the cat will be either dead, due to the poison gas being released, or alive.  According to quantum physics, however, the cat is actually in a superposition of both possibilities until you open the box. Upon opening the box and observing the cat one of the potentials will become reality. This sounds absurd to anyone who thinks they understand the nature of the reality we live in, but the truth is we really don’t understand it. It makes sense to be confused by this concept. How can there be two outcomes existing at the same time in the same place?

In an attempt to make sense of this, American physicist, Hugh Everette came up with, what is known as, The Many Worlds Interpretation. This interpretation is exactly what it sounds like. It assumes the reality that multiple worlds are existing parallel to each other at the same time and in the same space. These multiple worlds make up the multiverse. The multiverse is every universe possible with every possible variation existing at the same time to construct the entirety of existence. In other words, there are an unfathomable number of parallel realities that are just as real as the one we are in, but each one is different so that none of them are the same.  It is this very strangeness that lends the potential for quantum computing. It has been theorized that quantum computing works by actually tapping into the power of the “Multiverse”. Oxford physicist David Deutsch, who is considered a pioneer in the field of quantum computation, is quoted as saying “Quantum Computation…will be the first technology that allows useful tasks to be performed in collaboration between parallel universes.”  Now that you understand this, you can begin to realize just how it might be that quantum computers get their unbelievable computational power. If they are able to tap into the multiverse, one could easily assume the  computational ability of a quantum system to be practically without limits. It sounds a lot like science fiction, but it is perhaps the best explanation we have for quantum mechanics and the computational capability of quantum computers. Now let’s talk about the quantum computers that exist today starting with D-Wave..

D-Wave Systems Inc. is a quantum computing company based out of Canada. They are the world’s first commercial supplier of quantum computers. Some of their most famous customers have been Lockheed Martin, Google, Volkswagen, and NASA. It makes sense that their computers have attracted the attention of these name brand companies. Their computational power is incredible. It is quoted on the D-Wave website that their “..qauantum computers tap directly into an unimaginably vast fabric of reality—the strange and counterintuitive world of quantum mechanics.”. These quantum computers work by using something called quantum bits, also known as q-bits. Conventional computers analyze and store data using bits represented by 1s and 0s. Q-bits are able to encode these 1s and 0s at the same time by utilizing the quantum superstate. According to their website “This superposition of states—along with the other quantum mechanical phenomena of entanglement and tunneling—enables quantum computers to manipulate enormous combinations of states at once.”. Pictured here is a quantum computer built by D-Wave Systems inc. Since these quantum computers can only function in temperatures close to absolute zero, scientists have created environments colder than the vacuum of space in order to operate these machines.

Another company responsible for designing quantum systems is IBM. IBM provides quantum systems for select clients who want to have an on-location system for their exclusive use. The clients who they have provided these systems to include national governments,

financial services, pharmaceutical companies, and energy companies. IBM is also the first company to put quantum computing on the cloud. Today, anyone can access their quantum cloud services to conduct research and solve problems. The IBM quantum cloud network has become a worldwide community encompassing many leading fortune 500 companies, academic institutions, and research labs. In Feburary of 2021 IBM came out with a Quantum Development roadmap that states that they are trying to accomplish the goal of creating a 1000 qbit system in the next 3 years. Meanwhile, D-Wave has recently unveiled a new 5000 qbit machine! We still have a long way to go in the development of quantum computers, but it is moving quickly and before we know it these devices will be used to solve some of humanity’s most significant problems. The future challenges that IBM’s quantum systems plan to face are feeding increasing numbers of people, changing the way we use natural resources, better managing global economies, and countering new viruses.

The race for quantum supremacy on Earth is always ongoing and an exciting new development has recently been made. Last month a Chinese research team effectively designed a quantum processor called Zu Chongzhi.  It is said that in just 200 seconds the machine was able to solve a mathematical calculation that would take the world’s most powerful supercomputer 10,000 years to complete. This is an essential milestone in the world of quantum computing. China has now proven that they are a major player in the field of quantum computing and can compete with systems in the USA such as Google’s Sycamore which at one point claimed quantum supremacy before China.

You may be wondering by now if an average person today can get access to a quantum computer? There are plans in the works to make quantum computers more affordable and accessible to the general population, but for now, if you want to utilize the power of a quantum system without shelling out the hefty prices then all you have to do is go to IBM’s website and sign up to use one of their computers remotely.

It is hypothesized that quantum computers will help humanity answer some of our deepest questions. It may assist us in finding life on other planets as well as help us understand the very nature of our own consciousness. These quantum systems are advancing quickly and quantum supremacy will likely be claimed again and again as the race continues on. We will continue to hear breaking news about new feats being accomplished by these machines and Respectable Tech will be here to cover the news when it comes out.